Buy a custom made hardware cheat and bypass FaceIt and ESEA with ease. 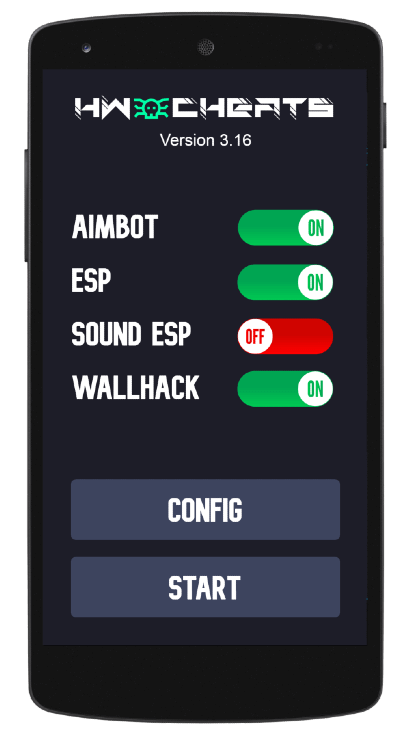 Run The Cheat From Our Mobile APP

You can change config, settings and turn on different hacks with our new Android and iOS app, without touching your PC.

Counter-Strike: Global Offensive, popularly known as CSGO, is a first-person game developed and published by Valve. The multiplayer game is the fourth in the series and has outperformed all previous titles in popularity and sales. CSGO was released in 2012 for PC, Xbox, and PlayStation platforms and ran on the Source engine.

In the game, players are placed in groups, choosing from the available nine game modes. For example, the players have to rescue hostages or defeat some terrorists before they can plant bombs. CSGO also has a competitive mode where players get to play against each other, and the team that outlasts the other is rewarded with game points and a higher ranking.

CSGO is now popular and has been included in esports competitions. As the game’s popularity rises, players are getting skilled, and it can be challenging to beat them. As a result, some players rely on cheats to improve their gameplay and get an advantage in the games. Since hacks are getting hugely unreliable, players are turning to CSGO hardware cheats for the solution.

What are CSGO hardware cheats?

CSGO hardware cheats are tools that are incorporated into the player’s hardware components to influence their gameplay. For example, they could be added to the computer’s motherboard or onto the controllers in the case of console players.

These hardware cheats use machine learning processes to mimick a human play and reciprocate it in the games with higher accuracy. They can thus be configured to activate any feature they contain for the game.

Most CSGO hardware cheats are attached to the CPU and get data from your gameplay without altering any game files. It will thus monitor your gameplay, and this will help it understand your game styles and the mode you play. The tool can thus respond better to the gameplay.

The other component of the cheat is attached to the keyboard and mouse through a wireless connection. It is through these peripherals that the required actions in the gameplay are taken.

These cheats can bypass even the hardest anti-cheats like ESEA and Faceit.

These are the various ways the hacks will alter your gameplay once activated. The features will make you a better CSGO player and will give you an advantage regardless of the mode you play. It will now take you a shorter time to beat rival players, and you can rise through the game’s ranks faster. These features affect the main objective of the first-person shooter game.

This feature on CSGO hardware cheats aims to ensure you never miss any shot you take. It will help you focus on targets regardless of their distance, and you can easily fire at them and kill or injure them. This feature is convenient, especially when you encounter expert players with higher accuracy ratings than you. It will give you a fighting chance in the game, and you can defeat them for higher in-game points.

The aim assists feature works on all your weapons, even those without a scope. You can further alter the settings in the hardware interface to select your preferred target. These include headshot options to ensure you gather more points in the game in a shorter time.

Your accuracy is bound to decline after some hours of gameplay. This can make you vulnerable to other player’s attacks and could lead you to missing shots. You can thus become less effective in the games, and you need this feature on the hardware hack.

It will take shots at rival players, and all you have to do is face to their general direction. The feature will adjust your crosshair towards the enemy player and fire at them with accuracy. You can thus sit back as it takes out these players from the game.

Recoils are common in heavy weapons on CSGO, such as snipers and other assault rifles. Players have to take aims over and over again whenever they fire the guns. This can be challenging and will open them up to attacks. The feature on the CSGO hardware cheats ensures this doesn’t happen.

Your weapons will remain intact after every shot, and you can continue firing without aiming again. This will give you an advantage over other players, and you can play better. Players can also beat rivals easily once the feature is activated.

Detection is the main concern for players who use cheats in games. Once detected, players can get banned and lose all their game progress and ranking. Hardware cheats are, however, a reliable alternative to scripts as they are completely undetectable.

They draw game data from the CPU but will not make any alterations to the game files. The anti-cheat software by Valve checks on file integrity to determine whether a player cheats, meaning you will always remain undetected.

This is a convenient way to play the game, and you don’t have to take any risks. You can enjoy all the benefits these hacks offer to your gameplay without any consequences. This makes them convenient for many players, and they also don’t need to have numerous scripts for different features of the games.

CSGO has many pro gamers, and competing with them can be challenging. Hardware hacks, however, offer a simpler alternative to increasing your game ranking as you play against many experienced players. With these hack features, you can now beat them in the games easily, and you will have a higher game ranking.

Allows for a learning curve

Beginners have a challenging time playing CSGO, especially when they encounter a server with highly ranked players. These hacks offer a better alternative and an opportunity to understand gameplay and get better. They can thus last longer in the games and achieve more with these hardware hacks.

Are hardware hacks safe for your PC?

CSGO hardware hacks will not make any alterations to your game files. You won’t have to download additional scripts before you can run them. This thus guarantees their safety and ensures players can use them without the risk to their PCs, as is common with scripts. CSGO hardware cheats are a reliable alternative for many gamers.